What type of E-Bike do I choose for the Camino, an E-MTB or an E-Trekking? 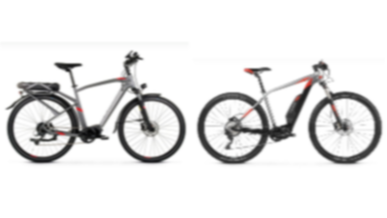 What type of E-Bike do I choose for the Camino, an E-MTB or an E-Trekking?

The phenomenon of so-called electric bicycles, although they are actually pedaling assistance, is already unstoppable. At Cycling the Camino we were always a bit reluctant to implement them for technical reasons and people's experience, but now that the evolution of engines has become a reality and that many pilgrims are already regular users of E-Bikes, we have been using several models in our offer.

Allied with the Kross brand that assemble the Shimano motors and batteries, Cycling the Camino has obtained a very good experience in terms of results in the rental of this type of bicycles for the Camino de Santiago. Its good power, its simple handling and the good response, even with pilgrims without previous experience with E-Bikes, makes us continue to bet on this assembly. Our E-Bikes usually handle distances that can exceed 100 km with a single 100% charge if the user manages to conveniently handle the different powers and the combination with the gears and the terrain.

But having said that, many ask us what type of E-Bike is most advisable for the Camino de Santiago. The answer is more or less simple. If the pilgrim is goint to follow the real route of the Camino, in which the dirt tracks predominate, the answer is the E-MTB, the electric mountain bike. We usually speak of a pilgrimage percentage of 75% trail and, perhaps, 25% asphalt. On the other hand, if the route plan has more in mind the road than the entrance through the dirt road, we would always recommend the E-Trekking. In other words, the corresponding one for 75% asphalt and 25% for dirt tracks.

The reason is simple, E-MTBs have a type of tire that is softer, wider and with studs to avoid problems in the case of dirt, even mud. On the other hand, the E-Trekking wheels are wheels with an almost smooth tread, thinner and that, although they allow transit on dry dirt tracks, they would be less efficient on wet ground or mud, since without a tread it is more possible to produce a fall.

It is true that both models have front suspension, although as is logical, the E-MTB has a greater travel in the damping and the lock button is on the handlebar; while the E-Trekking is regulated on the fork itself and its suspension travel is less.